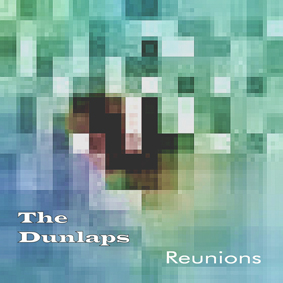 This collection of newly remastered versions (2008) includes tracks from 5 sessions by The Dunlaps: 1985, ‘86, ‘87, ‘88 and 2005. All tracks except “Moments had” (2005) were originally recorded direct to stereo cassettes under relatively primitive recording conditions. Tracks 3, 7, 8, 9, 11, 12 and 14 were spontaneous improvisations recorded in single takes with no overdubs (there was a bit of subsequent remixing done to the beginning of “Abridged”). On the other tracks overdubs were improvised and mixed “on the fly” while copying from one cassette deck to another. In some cases (trks 1 & 5) additional accompaniments were pre-recorded or sequenced (using samplers’ on-board sequencers) and flown into the mix live while improvising. The percussion on trk 1 was recorded to 2 short answering-machine cassette loops of different lengths. “Moments had” was recorded in 2 improvised takes to 4-trk cassette multi-track then treated and remixed by RDunlap in digital software. “To Walk a Thousand Lands” was originally an RDunlap solo recording, overdubbed with sax and additional percussion by The Dunlaps.

Brothers Richard (RDunlap) and Frank-o Dunlap live in different states and don’t see each other often, but over the years have come together for a few recording sessions, mostly during the second half of the ‘80s but also as recently as 2005. The Dunlaps have explored improvisation and production in an experimental, jazz-influenced avant-garage proto-post-rock sort of style. RDunlap is also known for his avant-garde remix and collage project dadala, PcOnTrApTiOn (eclectic alternative electronica collaboration with Johann Meier of Jopy) and his own solo work.

Taped by
The Dunlaps

Uploaded by Clinical Archives on March 25, 2009